The Lower Owens River Project (LORP) is the largest river restoration of its kind ever undertaken in the United States. This dynamic adaptive management project, initiated in December 2006, encompasses re-watering a 62-mile-long stretch of river and adjacent floodplain left essentially dry after the river was diverted into the Los Angeles aqueduct in 1913. In addition to the new riverine-riparian habitat, the project also includes the 20,400-acre Blackrock Waterfowl Management Area, several Off-River Lakes and Ponds, and the Owens River Delta Habitat Area. 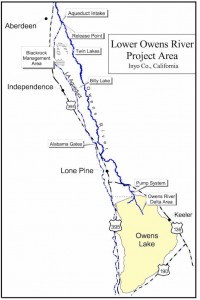 Under the Inyo/Los Angeles Long Term Water Agreement the County and LADWP committed to rewater the full 62-mile reach of the river as part of the Lower Owens River Project (LORP). The LORP also provides permanent water supplies to several lakes and ponds and two waterfowl and shorebird habitat areas, in all totaling approximately 1,800 acres of off-river habitat. By December of 2006, the river was receiving a regular supply of water and maintaining its minimum 40 cfs flow, and the wetlands and ponds were meeting goals. Water for the project is supplied from the Owen River at the point at which the water enters the Los Angeles Aqueduct. A pump system at the north end of Owens Lake, pumps up to 50 cubic feet per second either to the aqueduct or to Owens Lake for dust control.