You are here: Home / Projects / Saltcedar

Saltcedar (Tamarix ramosissima) is a non-native invasive shrub that is established in the Owens Valley. Why do these shrubby plants need to be controlled? Though intentionally introduced from Europe and Asia into the U.S. in the late 1800’s, saltcedar has been expanding its range in the Owens Valley since the late 1960’s. In the valley, as elsewhere in the western U.S., this species does not thrive without human assistance. It benefits from disturbance in the form of dams, diversions, floods, fires, and water table fluctuations which stress native species and provide conditions that favor saltcedar.

Once established, saltcedar can out-compete stressed native plants and cover large areas of formerly native habitat. Though plants have pioneered new areas for eons, the pace of human assisted migrations can surpass the abilities of native plants, animals and insects to adapt or coexist competitively. The result is a less productive and less diverse environment. In riparian areas in the Southwest where this has occurred, entire ecosystems have been displaced or eliminated, flood and fire frequencies have risen, and species biodiversity has declined. To stem this spread, our goal is to gradually restore disturbed, weedy areas to a more stable natural state.

In 1997, the ICWD initiated a saltcedar control program. The program was made possible by funding provided by LADWP under the long-term water agreement. This funding provides $750,000 over the first three years of the program and $50,000 per year thereafter for maintenance. 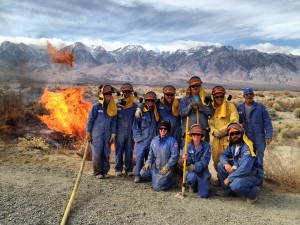 The Inyo County saltcedar field season is from September through March. Each winter we hire 4-6 seasonal employees to work outdoors in the Owens Valley. We’re outside most of the season in all types of weather and conditions. Chainsaw experience is not mandatory. Strength, adaptability, and teamwork are valued highly.